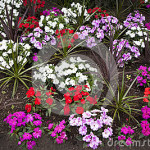 When I attended Merriefield Garden Center’s class on container gardening, I learned that there is a serious Impatiens disease, like downy mildew, that affects many of the Impatiens that so many of us love. It also poisons the soil.
Unfortunately, this disease is spread both in the soil and in the air, and is caused by a fungus-like microorganism, named, Plasmaopara obducens. When Impatiens are affected, they may show signs of stunted growth, unusually light green leaves, dropping of leaves and flowers and even stem collapse. You also may see a white, downy substance – similar to powdery mildew – on the bottom of the leaves. For details about this fungus, go to http://nt.ars-grin.gov/taxadescriptions/factsheets/index.cfm?thisapp=Plasmoparaobducens.
This disease has long plagued Impatiens walleriana in England, Europe, Africa, Australia and Asia was, and it first showed up in America in 2004 in growers’ greenhouses. However, last Fall, it was discovered in landscapes in the Midwest, the Mid-Atlantic and in coastal Southern California; and it is spreading.
Contrary to the message being spread that the growers have figured out how to control this problem, we were told that the growers can prevent the symptoms from showing up long enough to get the plants to nurseries; but, after you buy and plant them, the disease will resume progress and infect your soil and the air, thus making the problem continue to worsen for everyone. And, it will cost you far more to pump the plants full of chemicals than the plants, themselves, cost.

Merriefield Garden Center does not want to contribute to the spread of disease, so they have decided not to sell this kind of Impatiens, even though those sales equal twenty percent of the annuals business each year! Now, THAT, is social responsibility!

• Some species of Impatiens are not affected, and they are the Varieties: New Guinea and Sunpatiens.
• There are many alternative, colorful plants that can be used in the shady spaces normally occupied by Impatiens. They include Caladiums, many Begonias, and Coleus, among others. Talk with any garden center that has plant and soil expert staff, or research it on the web to find out what will work in your environment.