Once upon a time in 2006, I was invited to join an African-American troupe of actors and dancers to create and perform a dramatic reading as if I were Harriet Beecher Stowe. What an honor!

As darkness fell, we Thespians gathered at the First African Methodist Episcopal Church in Manassas, Virginia, to perform for Watch Night. Just as the slaves had waited all night in anxious anticipation – hoping, but not knowing if, the proclamation would be made – we felt the tension, and then our purpose was to remember and celebrate the Emancipation Proclamation (enacted January 1, 1863). It freed slaves in the Confederate states during the American Civil War.

Having researched Harriet Beecher Stowe, I excerpted contributions*, wrote, and performed this script as a dramatic reading, along with the African-American members of the cast who had other parts to play. We were in period costume and were well-received. In fact, we were asked to perform several more times in different venues, using shorter or longer versions of our scripts. 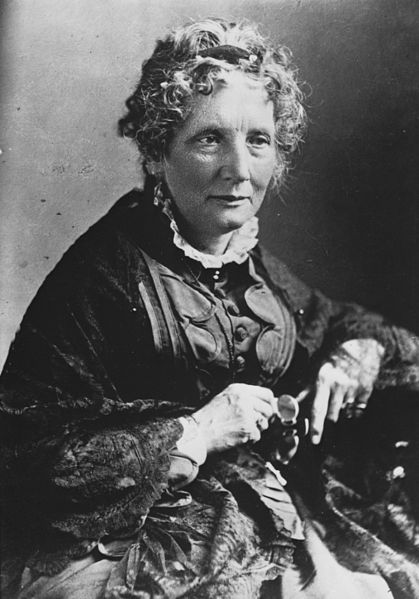 Gracious!  That Mr. President Abraham Lincoln is a tall man and so imposing in his ways!  Imagine how my poor heart fluttered as my eyes inched up his spindly frame all the way to the top where sat the most stern and kindly face!  His voice boomed at me when he said, “So this is the little lady who started that great big war!”

Mr. President Abraham Lincoln feigned delight in seeing me and talked in congratulatory tones; yet, even as he twinkled his eyes in my direction, I could hear the gray granite edge in his words.  He wanted the states to be one union and did not want to polarize people more by taking sides on the issue of slavery.

But, Mr. President Abraham Lincoln hadn’t counted on the Omnipotent Will of God to do what he and the church would not willingly do.

Now, here he was, towering over me after I wrote Uncle Tom’s Cabin.  What a picture!  After all, “…I am a little bit of a woman, — somewhat more than forty, about as thin and dry as a pinch of snuff; never very much to look at in my best days, and looking like a used-up article now.”

I was christened Harriet Beecher and was the seventh child in my family.  After the ninth child was born, my dear, pious mother died of tuberculosis, leaving us to be raised by our Calvinist father, who preached constantly about hell and damnation!  He became the president of a seminary when I was 22 and moved us from Connecticut to Ohio where he wanted to save the frontier from Catholics and other undesirables.

In Cincinnati, I met and married my husband, Mr. Stowe, another minister and my father’s only faculty member.  “He was rich in Greek and Hebrew, Latin and Arabic, and, alas! rich in nothing else.…”

But I gained wealth of another sort in my seven children, the most beautiful and … loved of whom lies buried near my Cincinnati residence.  (Charley died in the cholera epidemic at ‘round about one year old.) It was at his dying bed and …grave that I learned what a poor slave mother may feel when her child is torn away from her.”

During long years of struggling with poverty and sickness, my faithful friend, Anna, sometimes kept the babies, to enable me to set quill to ink and parchment. Thus, I became an author, very modest at first, I do assure you.

I may never have written Uncle Tom’s Cabin, were it not for Congress passing the Fugitive Slave Law and then for the anguish of my sister who wrote, “Hattie, if I could use a pen as you can, I would write something to make this whole nation feel what an accursed thing slavery is.”  I rejoined, “I will write something.  I will if I live.”

It began as a serial, with chapters sent to the “National Era” in Washington.  Then, it became an enormously popular book.  Now, it seems like everyone in civilized countries has read Uncle Tom’s Cabin, and I have been inundated with praise and criticism, both here and abroad.

There are many coarse expressions of hatred from slave holders and their sympathizers.  Sadly, these stinging barbs greatly affect my husband, from whom I am often separated on speaking engagements.  He is a pudgy little man and a bit of a hypochondriac, who sees ghosts and often takes to his bed in a crisis or when he learns of the insults and threats hurled against me.

I wrote, “I grieve to see how much you suffer…. For myself, I have not an anxiety, but am only vulnerable through you…..

….So God lays on you a heavy burden in the internal structure of your mind; but how blessed is this baptism of sorrow.  Would you part with what you have gained by your peculiar suffering?  I can see that you have acquired by it much that gives you power over other minds.

There is not one sorrow that I have had that I would part with, … nay, I bear with joy all that falls on my heart from day to day.  I say, “Welcome, cross of Christ!”

The citizenry shot arrows at my heart, but critics also sullied my reputation as a writer with the claim that my book is unsubstantiated.

This is untrue, as I learned lessons from the torturous tales of a slave woman, named Eliza Buck, from the life of the slave, Josiah Henson, from living near the underground escape routes of many slaves, and from educating slave children along with my own.  I even implored the honorable Frederick Douglass, Esquire to help me learn.

But, “I suffer exquisitely in writing these things.  It may be truly said that I write with my heart’s blood.”  Yet, the truth is, I did not write this book at all.  No, I didn’t.   Once I decided to write, I meditated, and it came to me in visions – fully laid out.  It began with the scene of the death of Tom and then worked itself out from there.  God wrote the book through me.  I was merely His instrument against the villainy of slavery.

My greatest sorrow about Uncle Tom is how some came to view him – usually people who have not even read the book.  They see him as a coward and a sycophant, who would do whatever the master said without regard to principles.  He was not that at all.  Tom was the epitome of a true man – whose honor mattered above all else –  so that, when he had earned and been given the trust of his master, he made sure to honor it – even at the cost of personal freedom.  I wish people could understand that.  He was the most Christian of Christians in that regard.  He was obedient to the Golden Rule and to the Ten Commandments – the principles of the Master On High, not the slave master.

Well now, I have raised my family through poverty and sickness; I have traveled the world; and I have met Mr. President Abraham Lincoln.  I hope I have contributed in some small way to feed the fires of justice and mercy.  Tonight, in the year of our Lord, 1863, we huddle together waiting to see whether the Emancipation Proclamation will be signed into law. Yet, even if it is, the work is not done.

On the shores of our free states are emerging the poor, shattered, broken remnants of families,–men and women, escaped – by miraculous providences – from the surges of slavery, … a system which confounds and confuses every principle of Christianity and morality.

They come to seek a refuge among you; they… seek education, knowledge, Christianity.  What do you owe to these poor unfortunates, O Christians?  Does not every American Christian owe to the African Race some effort at reparation for the wrongs that the American nation has brought upon them?  Shall the doors of churches and school-houses be shut down upon them?  Shall states arise and shake them out?  Shall the Church of Christ hear in silence the taunt that is thrown at them, and shrink away from the helpless hand that they stretch out….?

If it must be so, it will be a mournful spectacle.  If it must be so, the country will have reason to tremble, when it remembers that the fate of nations is in the hand of the One who is very pitiful and of tender compassion.  Vengeance is Mine, sayeth the Lord.  And blessed are the meek for they shall inherit the earth! Hah! So be it, and so it is.  Halleluiah!

Although she is most famous for writing Uncle Tom’s Cabin, Harriet Beecher Stowe wrote novels, poems, travel books, biographical sketches, and children’s books. She met and corresponded with famous people of her time, such as Lady Byron, Oliver Wendell Holmes, and George Eliot.

*PostScript: my notes for this project were lost in a computer crash, so I no longer have the research citations to present with this script. I know some items were in the public domain, but now – 14 years later – I don’t remember if all of it was. 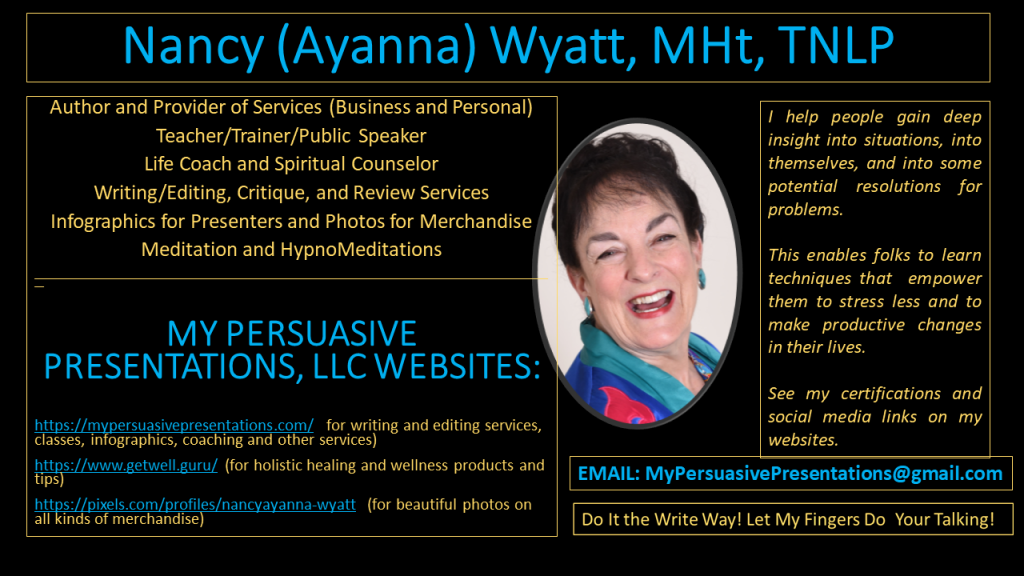 As you can discern from reading this, scripts must be done in many different “voices,” so that the words, context, and flavor mirror the characteristics, circumstances, period, and environs of the person being depicted.

I love doing scripts, whether they are for the performing arts, business, or simply for people to share with their progeny. Click Here to learn more about the scripts for “Tapping” (the Emotional Freedom Technique / EFT). In addition, you can click on these links for my book, Three Hots and a Cot, Stories of Courage from People Struggling with Homelessness, Addiction, and AIDS, or my play Break the Chain, which is about domestic violence.

To learn more about my general writing, critiquing, and editing services, Click Here.

Feel free to contact me at MyPersuasivePresentations@gmail.com if you would like a FREE initial consultation about your project. Whether it’s web content, a biography, or correspondence, I bet I can help you.