Scripts For All Occasions ~ 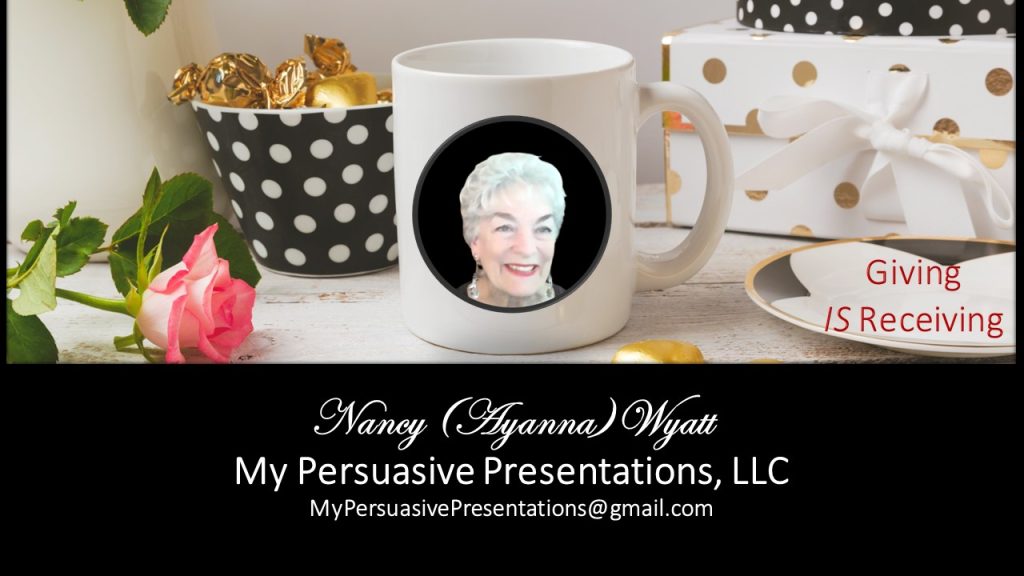 Let’s have some fun and write some scripts!

Here’s a short video about my services.

Here are some Samples of my Writing, Editing, Training, and Presentations Projects.

“Break the Chain,” A Play About Domestic Violence 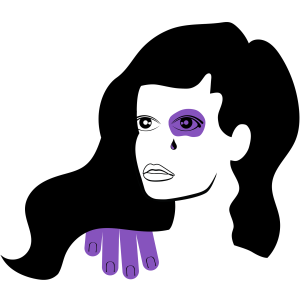 Once upon a time, I wrote, produced, directed, and acted in a one-act play which is about the common cycle of behaviors among people experiencing domestic violence and how those behaviors are passed down through the generations. It is easy to stage, has a small cast, and is available for purchase. Click Here to learn more.

We Can Write A Book (Or, I Can Ghostwrite Yours)

I can review, critique, edit, write, co-author, or help you develop your book.

During your free, initial, no-pressure consultation, we’ll probably meet via Zoom or a similar media, rather than in-person, as I would have preferred.

Here is one of my publications and the link for book reviews.

It is a playbook (the script of a play, used by the actors as an acting text, including licensing agreements plus line numbers for use by actors and directors who are staging the production). It is available here.

The paperback book for the reading public is available here at $10 + $3 shipping.

Now, it’s also available on Amazon as a paperback or Kindle book.

Below, See the REAL People Featured In

About Homelessness, Addiction, and AIDS

I am pictured here with some of the Voices From the Streets and Variety Pack players. These people became my friends in Washington, D.C. I met them while volunteering at a shelter for people experiencing homelessness, addiction, AIDS, and other traumas. Most of them lived in the largest shelter in the country, and all helped us raise awareness about the difficult issues they faced. Also pictured is the late  Suzy Goldman, who first convinced me to become the Producer/Director for Voices From the Streets. That led to all things great and glorious! 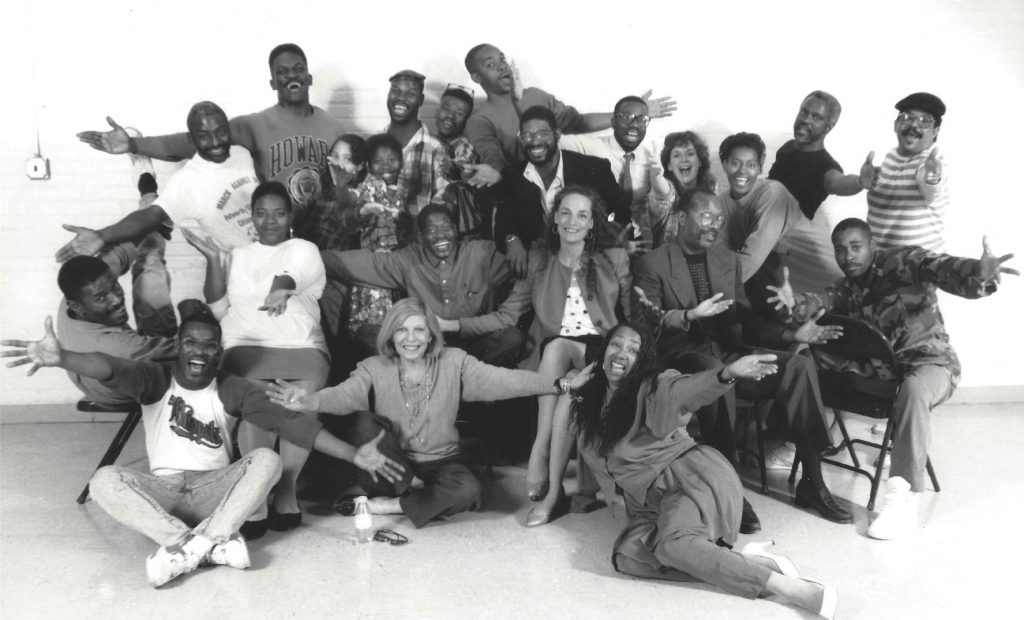 “Variety Pack” was the name of the non-profit organization I created to serve the interests of people who were homeless. It also was the name of my performing troupe, comprised of people I met at the Community for Creative Non-Violence (CCNV) shelter in Washington, D.C.

The scripts are authentic stories of people who became homeless, drug-addicted, and/or were diagnosed as HIV+. These monologues are told from the personal perspectives of homeless people, volunteers at the shelter, and an outside observer. If you’d like a sample, that is a composite of multiple characters, click here.

We performed the scripts as monologues because one never knew who actually would show up for a performance, given addiction, health issues, and the many physical dangers of living in a shelter environment. We chose to do them as dramatic readings, rather than as memorized pieces, for the same reason. There were occasions when we engaged our homeless musicians or gospel choir friends to perform with us between the soliloquies.

What Happened to The People?

Many of the homeless people died of AIDs, diabetes, and other afflictions. However, all the survivors who were members of my performing troupe went on to become “clean and sober.” They went back to or created new families, work, and school pursuits. They were able to resume normal lives and remain drug and alcohol-free all these years later. I am so proud of them!

Who Cared Enough to Book Us? 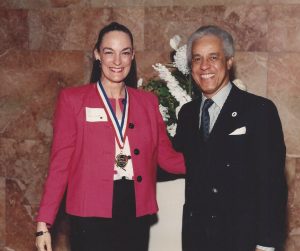 Congressman Tom Lantos entered one of the dramatic readings into the Congressional Record of the U.S.A., and our entire performance was videotaped by the National Archives of the U.S.A.

We played for members of Congress, the National Archives, and Virginia Governor Wilder’s Conference on Housing and Homelessness. (The Governor was kind enough to give me a Governor’s Gold Medal Award for voluntarism, and we received several other awards, including The One and Only Channel Nine  (WUSA-TV) Award for community service.

More commonly, we performed for religious, educational, business, and civic organizations throughout the Washington D.C. Metro Area and as far away as Kansas City. Performances of Three Hots and a Cot also were aired on Northern Virginia cable television for many months.

Go to my Amazon Author’s Page to order or to learn more about additional books, as they are published.

Confetti – An Anthology of the Written Word

The Write by the Rails Anthology ~ A Social Media Project

Some of my very short writings were selected for use as a contributing author to an anthology, compiled by Write by the Rails (WbtR), the Prince William Chapter of The Virginia Writer’s Club. Why were the writings short?

WbtR conducted a three-month campaign designed to bring creativity to social media.  We created Twitter-friendly writings, meaning the submissions had to be within the confines of the number of characters allowed for Tweets, including hashtags.

Someone had the idea of creating writers’ challenges that were to write a concept that could be encompassed in #NineWords. That prompted me to start my own #NineWordChallenge! The initiative elicited hundreds of short poems, lines of fiction, anecdotes, and words of wisdom, many of which can be found on Facebook and Twitter under the campaign hashtags #WbtR #BackOnTrackNow.

From those submissions, a panel of judges chose the works of 22 authors for inclusion in this unique book. For more information about the anthology, go to  #BackOnTrackNow: A Write by the Rails Anthology and Social Media Initiative.

It’s ok, as long as it’s wearing one sock and a lopsided hat.”  ~ Nancy Wyatt

From a Mom to her husband about his Mom,

“The only thing that separates us from the other animals

“And it sounds like what the circus people say ~

I love ya, honey, but the season’s over.” ~ Nancy Wyatt

To purchase it in paperback and Kindle formats, click on this link.>

#BackOnTrackNow: A Write by the Rails Anthology and Social Media Initiative K

Now, Let’s Do YOURS! 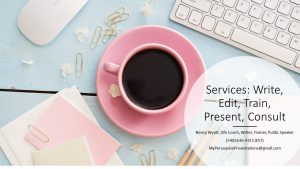 There are so many potential uses for a written script in everyday personal and professional life that they cannot all be mentioned here.  Think of your own needs, and contact me for a FREE initial consultation to see what best would meet your needs!

Email MyPersuasivePresentations@gmail.com and put the area of interest in the subject line. For example, “Free Consult Re Speech I Have to Give Soon” will give me a clue to get back to you quickly!

Also, see the separate pages on this website for existing scripts that you may purchase.

Fees by the Hour or by the Project 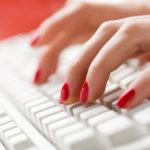 My fees vary, depending on whether you choose editing, writing, or reviewing services. Fees also are influenced by the:

How to Get the Best Deal on Scripts – Lowest Rate and Highest Priority for YOU! 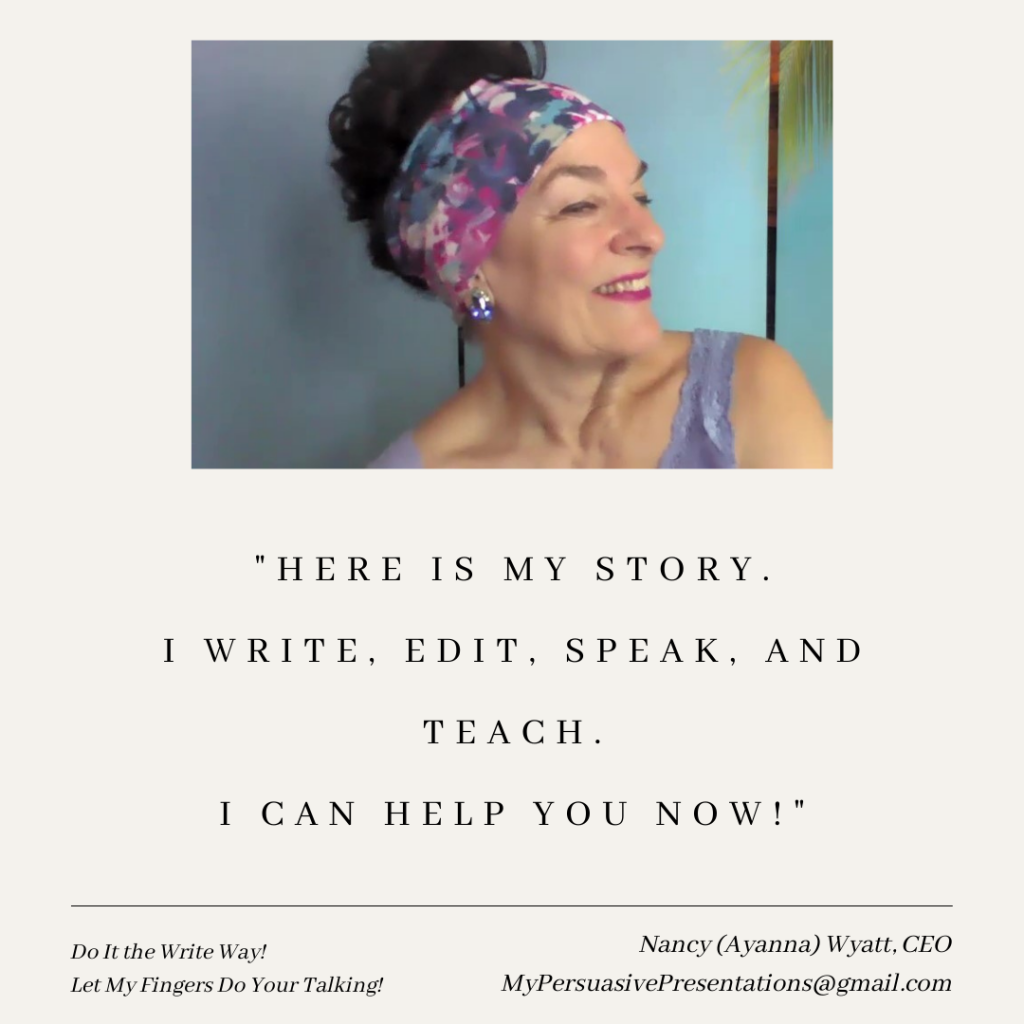 If you put me on retainer for six months or longer, I’ll give you a reduced rate. You also may qualify in other ways to be one of my VIP Clients. In addition, I occasionally give discounts to specific networking group members, people in my classes, or life coaching clients, and to worthy causes. Contact me for details.

Thank you for your business and…